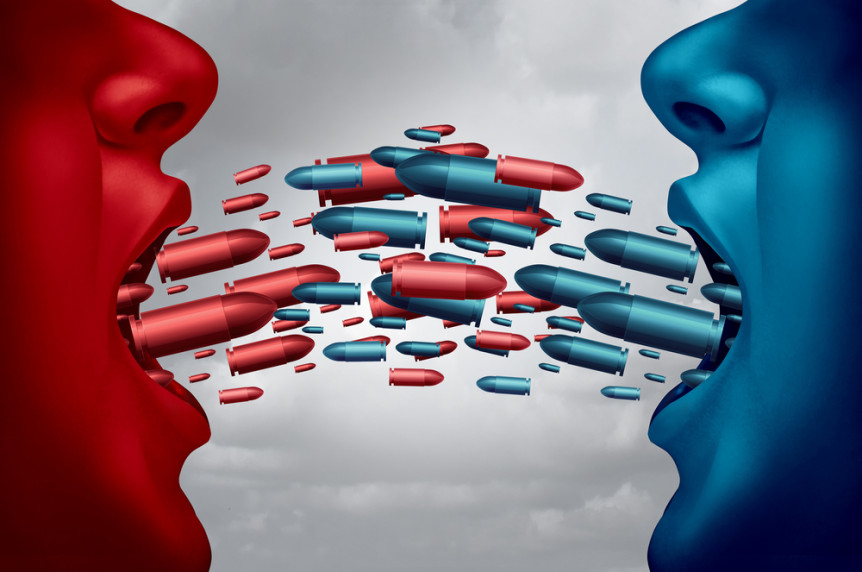 I read words such as “I cannot believe that 81 percent of all evangelical Christians voted for Trump.” These Christian  writers proceed to judge these millions of Christians as utterly degenerate. Then other Christians envision Donald Trump as their patron saint and proceed to condemn to outer darkness all those who might see it otherwise.  Certainly as of today’s date none of those referenced above have demonstrated in my presence a willingness or ability to  respectfully or humbly talk with each other.  So diversity inside unity is out! Uniformity is in!

Maybe the problem is that many of us are infected with a kind of culture Christianity which seems to be disengaged from the person of Jesus. The word discipleship-learner-follower of Jesus occurs 269 times in the New Testament. Christian appears three times. Many of us who identify as Christians consider discipleship “optional graduate school” for Christians. Jesus disagrees. He said “follow me”. This is not optional graduate school-it is required kindergarten  curriculum. We are called to immerse ourselves in the person, the work and the words of one person-Jesus. Words such as “Do not return evil for evil” and “Do not trash your enemy”

are taught in some of Jesus’s first kindergarten lessons. Jesus has been calling me back to my kindergarten desk.

Maybe part of the answer begins with us examining ourselves and our relationship with Christ and his church. He saves us, kills us, fills us, and disciples us so that we might be able to live in a real community without killing each other. Respectful conversations with those with whom we disagree is a mark of disciples in real spiritual communities-it is not a mark of cultural  “Christianity”.  For example Paul’s letter to Rome, chapters 14-15, walks us through a big disagreement and a still bigger conversation within the church at Rome that does not lead to agreement but to humility, peace and unity in Christ.  At one point Paul says, “Do not destroy the work of God for the sake of food.”  Then later he puts the disagreement squarely “in Christ.”  “Accept one another as Christ has accepted you in order to bring praise to God.” The disagreement decreases; Christ increases.

If we are set right with God by trusting the faithfulness of God and not by being right then the Spirit of God will humble us disciples into crying out as half blind beggars, “God be merciful to me a sinner.” Too often we declare our convictions as if we see with 20-20 vision.  Nobody does! All of us see “through a mirror darkly.” We do not see face to face.  So we do not possess all the truth or righteousness in the room.

I have found some help for our dilemma from Baseball. Think of three umpires: The first umpire embodies what I will call the naive 20-20 true believer. “God said it. I believe it. That settles it.”  There is truth outside of us that we can easily interpret and understand perfectly every time. The first umpire thinks he/she sees with 20-20 vision.  Anyone who disagrees is either ignorant, insincere or both. I see no way to adopt the first option though it is rampant in bible thumping churches. Paul burst the balloon of certainty a long time ago when he declared “we see through a mirror darkly “ until Christ comes.  Do we know he has not come yet?

The second umpire says there are no balls or strikes unless I say there are. This is the postmodern relativistic view that denies any moral or spiritual truth outside me, the knowing feeling, judging self. This ump just wants the truth in the church to be the way he/she feels it is. The second ump believes we always see things “the way we are” and never the way they really are. I find the second option impossible to hold because it denies that truth exists outside the knowing self. That means Jesus Christ is simply a projection of my mind; not a reality in heaven and on earth.

The third umpire says there are balls and strikes and I call them the way I see them. This umpire recognizes that truth exists outside the knower of truth; but the knower is flawed and limited by sin and historical circumstances; this knower also realizes that knowing the truth will require a life long diligence-a relentless search for truth. This knower stays low, is not overcome by skepticism or arrogance-always seeks to know as he/she has already been fully known. (1 Corinthians 13:12). Though this knower does not see perfectly, this knower sees. Relational confidence replaces certainty.

As a broken half blind, yet Spirit filled beggar in Christ I adopt the third umpires vision. This approach immediately pours a good bit of much needed humility into my conversations regarding the meaning of the ancient texts and their possible application for now. The Holy Spirit exalts the crucified and risen Lord as public truth inside my broken mind and heart.

Jesus the Lord towers over us and our fundamentally flawed President. We do not see with 20-20 certainty but with the Spirit’s help we see. Let’s stop praying prayers in which we thank God we are not like all those political Reds or those political Blues.  As the prophet said, “He has shown you O mortal what is good. And what does the Lord privately and publicly require of you? To act justly and to love mercy and to walk humbly with your God.”