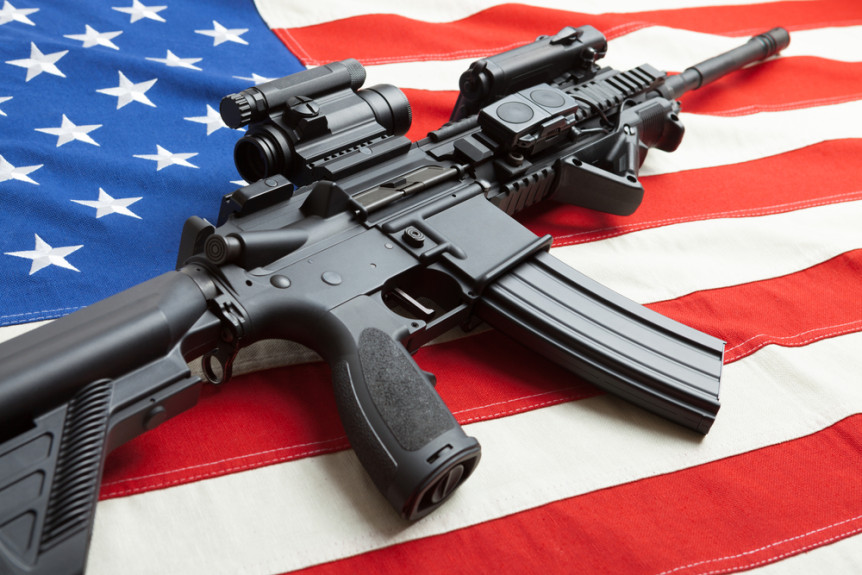 As has been noted there is one thing all Christians of every stripe actually hold to be true: all humans are sinful. We cannot stop being sinful. The sinfulness of humans continues to be demonstrated by several billion participants. Violent eruptions more senseless than Cain killing Abel happen every second.

So why would we, given our sinfulness, steadfastly oppose any meaningful gun control?  It’s true that guns do not kill people on their own. People kill people. But since none of us, including Christian believers can be perfected this side of Glory, why not limit the destruction such fallen sinners can rain down on each others heads? We can only change one side of the equation and that is the gun side.

We refuse to even require universal background checks on all of us sinners though we have universal backgrounds of sinfulness-some of us very violent backgrounds. Compare the Christian attitude to guns to the Christian attitude to marriage. We know that when the Lord said go forth and multiply he did not mean we have the right to have children with whomever we wish at any time. Though it is not in the nature of mammals to be monogamous churches support marriage, offer premarital counseling, discourage the watching of pornography or the solicitation of prostitutes or the secret affair. Churches acknowledge that people are not perfect, so they endorse the introduction of some guard rails to help them do less damage to those around them. They use their freedom to promote a limitation on their freedom for the sake of the common good.

Maybe it would be helpful to think about the tithing most of us practice which is a giving up of ten percent of what we own to bless somebody else. The idea being that hoarding money means we are relying on someone other than God. What if we gave up ten percent of our access to guns, say, just the semi-automatic rifles, declaring our faith that God will take care of us and our desire to bless the neighbor?

But instead we exercise the libertine option which refuses to exercise any restraint. As to most everything else we exercise restraint. We watch what we drink, what amusements we go after, what relationships we pursue, what we do with our money, our time, the words we employ and don’t employ. There are all kinds of constraints and restraints. But when it comes to lethal weapons we get to do anything we want. What about a tank or a cannon in every driveway? The ancient wisdom says, “All things are lawful but not all things are helpful.”

We are a creating a fantasy world. It’s a serious separation of the Gospel from reality. We are creating a world where people are saved by guns. I am opposed to abortion on demand and in order to save the lives of children and adults I am opposed to the legalization of semi-automatic rifles which puts them in the hands of people who have no need of a war making gun.

The 2nd amendment declares: “A well regulated militia being necessary to the security of a free state, the right of the people to keep and bear arms, shall not be infringed.” The Supreme Court in 2008 held for the first time in District of Columbia v. Heller that the Second Amendment protects an individual’s right to possess a firearm. The late Justice Antonin Scalia, a strict constructionist interpreter of the Constitution, writing for the Court, went out of his way to say that the right “is not unlimited.” Some claim that universal background checks and training to use a hand gun are unconstitutional. They are not. No court has so ruled.

Furthermore, assault weapons, the kind used to slaughter school children in Parkland Florida on Valentine’s Day, are weapons of war. They are not weapons of self defense or guns used for hunting. The murderer at Sandy Hook, 2012, using assault weapons, fired at least 155 rounds of ammunition within five minutes, shooting each of his victims multiple times, leaving 20 first graders and six adults dead.  In the after math of Sandy Hook the Maryland legislature passed a law banning assault weapons. That law still stands. Four federal appeals courts have recently ruled that the Second Amendment does not protect assault weapons.

The most angry and heartbroken of all Old Testament prophets, Jeremiah, singles out one thing that the Israelites were doing that God found repulsive: sacrificing their children. Are we choosing second amendment worship over the safety of our children? Jeremiah has a warning for his countryman: change the way you’re doing things, he says, or the place you live will get a new name: the Valley of Slaughter. That’s a pretty apt description of the Florida High School on Valentine’s day.

Is the Valley of Slaughter soon to become the new name of our neighborhoods?