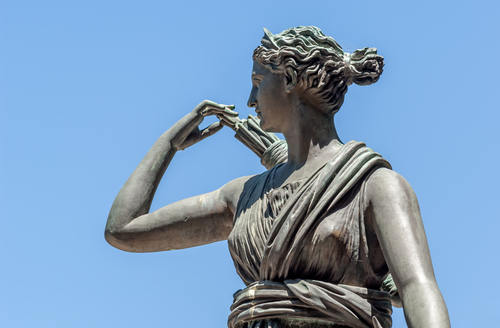 The background of Paul’s first letter to Timothy was a heresy of “unsound words” in the church in Ephesus. Paul described this heresy as “myths and endless genealogies.” The dominating mythology of Ephesus was propagated to all its citizens by the Artemis religious fertility cult, which was housed in a massive temple. Acts 19:23-40 testifies to the powerful hold Artemis had on her Ephesian subjects.

The heresy propagated in the temple of Artemis offered not only a vastly different vision of God but of women as well. The temple was run by women who surrounded themselves with castrated male priests. These women demeaned sex, disparaged marriage and denied the creation. (1 Timothy 4:1-5) Paul’s description in 1 Timothy of the “mythologies” matches up with the Artemis mythologies we know were there.

The entire letter of 1 Timothy deals with the false teachers mentioned in 1:3ff and Timothy’s role in quelling their influence. In chapter 2:1-10 Paul admonishes men and women to abandon the myths and their attendant behaviors. In 2:11-12 he tells women who have no background in the Old Covenant Scriptures and whose religious convictions have been formed by the Artemis cult, to “learn in quietness in full submission. I do not permit a woman to teach or to assume authority over a man; she must be quiet.”

He says this because female false teachers apparently taught that the Artemis mother-goddess created woman first. Paul is correcting this teaching with a reminder in verse 13 that in Genesis Adam was created first. Paul also wanted to establish that Eve was susceptible to temptation, not because he wanted to demonstrate women’s inferiority but to call into question the false teachers ideas of women’s superiority. (vs, 14) Paul’s analogy says women in Ephesus were being deceived like Eve long ago. He was not saying that all women, unlike men, inherit the capacity to be deceived.

The word that is translated as “try to dictate to them” or “domineer” (authentein, not exousia) is unusual and seems to have the overtones of being bossy or seizing control. In verse 12 the word “to domineer” in Greek qualifies the word “teach.” So the text actually prohibits women from teaching in a domineering way. The passage is not saying that women never have authority over a man, such as existed when Priscilla taught Apollos, but that a woman is forbidden from indulging in a controlling power trip over a man, as existed in the Artemis temple at Ephesus. What was unique here is Paul’s insistence that women learn. Women were judged by Judaism to be utterly incapable of learning; no longer.

This interpretation of 1 Timothy 2:11-15 takes into account the occasional nature of the letter, the religious myths in Ephesus, and the story and the plot of the Bible. Paul writes 1 Timothy 2:11-15 to correct a real problem in the Ephesian church but it does not correct the rest of the New Testament and it does not correct all women for all time. It would take a huge interpretive leap to make that assumption. So when Paul was telling women to be quiet in Ephesus, it is a special kind of silence among a specified group of women in need of learning.

Nothing is said in this text about informed, reliable, and gentle women teaching – either in church or out, either on religion or not, either to women or men, either to young or old. No biblical text has been so misused to dictate so many prohibitions that stifle so much service by so many people. Put simply, any female who has sufficient and accurate information may teach that information in a gentle spirit to whomever in whatever situation they may be found.